Replacing windows in your home doesn't mean you have to stick with the same style that was there previously. Instead, evaluate your options and personal priorities before choosing. Two common options include single hung and awning styles. If you have the freedom to choose between the two it's helpful to understand the differences between each style especially as they compare in efficiency.

In this post we'll cover the following topics:
Use the links below to jump head

Single hung↗ windows are a standard style of window in most modern U.S. homes. They are oriented vertically and have one moving part, a bottom panel (sash) that slides up and down to open smoothly after being unlocked. It reduces the moving parts and makes it more simplistic for the user. These can be found anywhere throughout a home as they offer a versatile design arrangement.

Awning windows are oriented more horizontally, being wider than they are tall. Most often, they open via a crank outwardly. They do this by hinging along the top and creating an awning shape as they move out. These are most commonly found in kitchens and bathrooms or paired with fixed picture windows. 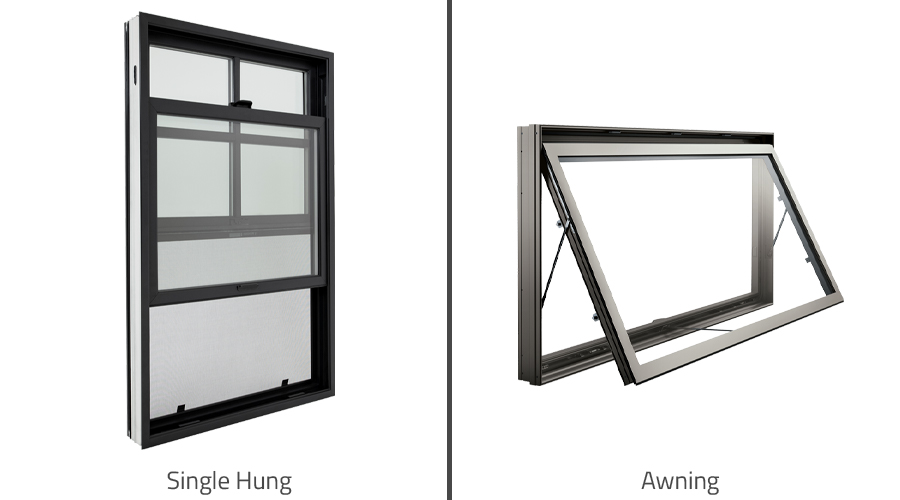 Single hung windows tend to be less energy efficient↗ than awning windows. The reason for this is that they have higher leakage rates due to their inability to seal as tightly.

Another factor that aids the energy efficiency of an awning window is that they have less moving parts. Single hung windows have an entire panel that moves against a fixed panel as well as a locking unit. Awning windows, once unlocked, move the whole, single panel via a crank. There is nothing else to seal against but the windows edge and the panel.

Should I Get Single Hung or Awning Windows for My Home?

Single hung windows have remained one of the most popular choices for home builders since they allow for a great deal of design customization around them. However, if you want to make your home as energy-efficient as possible, having a window with more of an airtight seal will do the trick better than a single hung with its sliding sash.

Consult with a window expert to help you think of all the possibilities when possible. In the meantime, consider your options based on the pros and cons of both.

Single hung windows can work well anywhere in the home. They are not as energy-efficient and some rattle during storms, meaning they are not always the best choice for regions with consistently inclement weather.

Choose single hung windows if you are tight on space. These don't take up as much space and are a classic choice.

Awning windows are most common in kitchens and bathrooms. Do not use them where they will push out onto areas of high traffic. They work well when placed up high, such as along the top edge of a picture window. Their use does not need to be restricted to these areas.

Choose awning windows if space is not an issue. Awning windows provide lots of ventilation and have a special aesthetic appeal.

If you are looking to increase your home's energy efficiency, it is worth considering adding in some awning windows. Both styles are modern and can suit the overall aesthetic of the home well.

Learn how to find ENERGY STAR rated replacement windows for your home. In this post, we’ll explain the ENERGY STAR criteria and provide product recommendations.

What Makes A Window Energy Efficient?

Energy efficient windows are a key component of your home's building envelope. The envelope, a structure's exterior shell, protects the structural integrity of your home and helps regulate the temperature inside. So what makes a window energy efficient? Find out what 5 key elements improve the energy efficiency of your windows.