Energy-efficient windows becoming more and more popular, as consumers look for ways to keep their homes comfortable while lowering their energy bills. Advances in window designs now help keep thermal energy from escaping through window sashes, while minimizing the amount of solar heating entering a home through the same windows.

Many of these energy-efficient windows have multiple panes of glass, with a layer of Argon or Krypton gas sandwiched in the middle. These gases serve as a barrier to energy that can make its way through the panes surrounding them, and the reduced energy transfer comes lower energy bills. After all, your heater or air conditioner won’t have to work as hard when it’s keeping only the inside of your home at a comfortable temperature, and not the areas outside it. 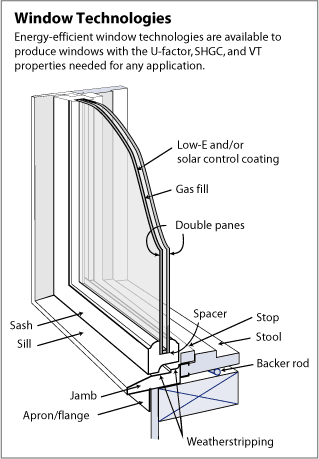 Some energy-efficient windows use Argon gas fillings. Others use Krypton, or even occasionally a combination of both gases. These windows are priced differently, but which ones are most worthwhile for you to get? Let’s take a closer look.

Think about how much more resistance you face when walking in water, as opposed to on dry land. Argon and Krypton make the slot between panes seem more like a swimming pool than the pool deck to energy attempting to pass through the space.

Just like consumers, businesses tend to cringe at higher costs. For that reason, windows with Argon fills are much more popular among remodeling companies. But why are Krypton windows so much more expensive to make and get for your home?

The answer: Krypton gas is hard to produce. The International Association of Certified Homebuilders states that Argon gas makes up about one percent of the atmosphere. That means that Argon gas is in far from abundant supply around the Earth. Still, Krypton is in even shorter supply, as it’s found only in trace amounts in the atmosphere. That drives the cost of Krypton up and makes Argon gas a more cost-efficient ingredient for energy efficient windows.

Is Krypton Worth It?

It really depends. Data from the Efficient Energy Collaborative shows that homes featuring triple-paned windows with Krypton fillings in the Dallas-Fort Worth region tend to have lower cooling costs than they would if they had double-paned, Argon filled windows with the same specifications installed. This cost difference could be as much as $20 per year.

Before deciding whether to choose Krypton-filled or Argon-filled windows, take a look around your home. If you have a top of the line climate-control system and only a moderate amount of windows, triple-paned windows with Krypton might be worth the extra cost. But if you have a large number of windows, natural shade outside your home or an air and heating unit that requires more juice to keep your home cool, Argon-filled double-paned windows might be a better investment.

Brennan Windows features several energy-efficient windows with Argon and Krypton gas fills from brands such as Andersen, Milgard and more.

When choosing replacement windows for your home you'll have to choose between triple pane glass and double pane glass. In this article, we'll review the costs, energy performance, and noise cancellation factors associated with triple pane windows.

Andersen has a wide range of product lines for window shoppers. In this article, we'll brief you on some of the differences between two of Andersen's most popular product lines, the 100 Series and 400 Series.