What Are The Different Parts of a Window?
Financing Options Available
888-964-3140

While many windows look similar, their parts can be different from one another depending on their operation style. In this post we’ll show you the different parts of a window so you know how to identify and name parts that you may want to customize when ordering new or replacement windows. You’ll also be able to name parts of the window in case you run into a problem and need a repair.

Read on to learn about:

General Parts of a Window

Windows have a few general parts in common both in and out of the frame. You’ll find these parts on most windows regardless of size or type. They include: 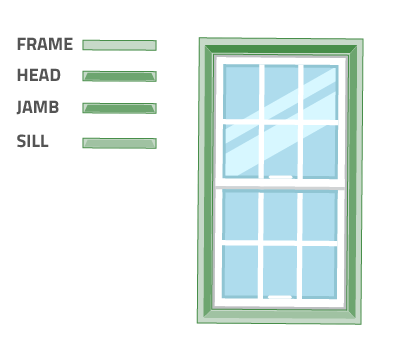 Frame - The frame is the outer part of the window. It contains the entire window system and is formed by three parts: the sill (bottom), the jamb (left and right side), and the head (top).

Sill - The sill forms the bottom part of the window frame.

Jamb - The jamb is the vertical side of the frame on the right or left side of the window.

Head - The head is the horizontal part at the top of the window frame. 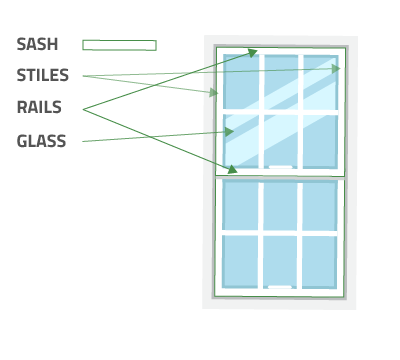 Stiles - Stiles are the vertical parts found at the sides of a window.

Rails - Rails are the horizontal parts of a sash.

Glass - Glass is held within the sash. Modern windows use insulated glass packages made up of two or more panes of glass.

Parts of a Double-Hung Window

Next, we’ll cover parts of a double-hung window. This is a common window style that has been used for centuries. It has two operable sashes which means they both lifted or lowered for ventilation. If you refer to the above list, double-hung windows have frames, sills, jambs, heads and window panes (among other parts that many other windows contain). Some of the key parts that are unique to a double-hung window include: 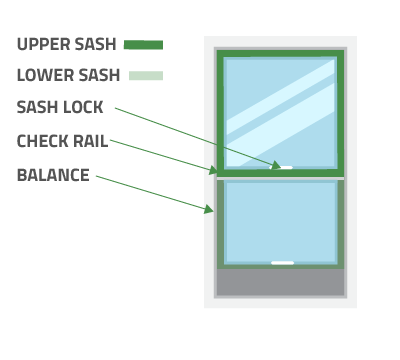 Lower Sash - The lower part of the two sashes, the lower sash is the moveable part that more commonly opened and closed than the upper sash.

Upper Sash - Like the Lower Sash, the Upper Sash is a moveable part of the window that is moveable as well, but is used much more rarely.

Sash Lock - The sash lock is a latch that locks together the upper sash and lower sash, making it impossible to move either part of the window.

Check Rail - The check rail is more commonly known as the middle of the window, and is the rail where the upper sash and the lower sash meet.

Parts of a Casement Window

Another common type of window is a casement window. Casement windows open outward horizontally instead of vertically like hung windows. This style of window has hinges that allow it to open out to a 90° angle. While parts of a casement window might look similar to a double-hung, the way the window works and the terminology involved is quite different. Key parts include: 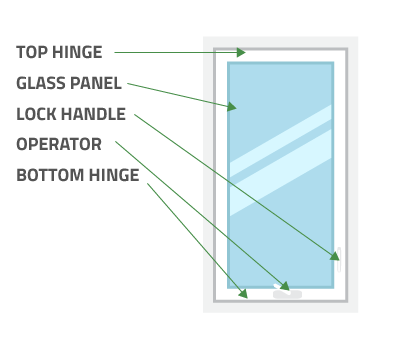 Hinged Glass Panel (sash) - A glass panel on casement windows that allows windows to open inward or outward (depending on the placement of the hinge).

Lock Handle - A locking mechanism located on the jamb (a vertical side of the frame). This feature provides a tight seal making casement windows more energy-efficient than other operable window styles.

Operator - Operated with a crank, this is the device that opens and closes the casement window.

In addition, windows can have several unique features depending on their placement and type. These include: 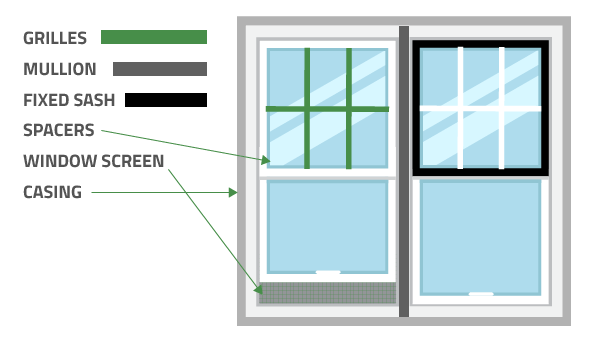 Grilles - Grilles are typically considered an upgrade to a window. There are different types of grilles but their main purpose is to create the illusion of multiple glass panes like old world windows.

Fixed Sash - Any panel of a window that is inoperable and cannot be used.

Spacers - Usually pieces of plastic or metal that are used to support the space between glass panes. Quality spacers improve the energy-efficiency of windows and act as a moisture barrier.

Window Screen - Most major manufacturers include screens with their operable windows. Screens provide a layer of protection against bugs and debris when the window is open.

Casing - Casing is the framing that covers the space between the window frame/jamb and the wall. Not all windows come with casing.

While many types of windows have several parts in common, there are also other key parts that make them different. Knowing and understanding the similarities and the differences can go a long way if you’re looking to try new window types. Knowing the specific parts can help inform your decision and make a sometimes-confusing process just a bit easier. For more information on window types and materials, visit Brennan’s vast selection of windows online.

What are tempered glass windows?

What Are Insulated Glass Windows?

Insulated glass windows combine many panes of glass into one window. Double and Triple-pane systems are becoming the industry standard for windows. Get the facts about how they can help reduce your home’s energy consumption.