In this article, we'll explain five common reasons why homeowners replace their windows. 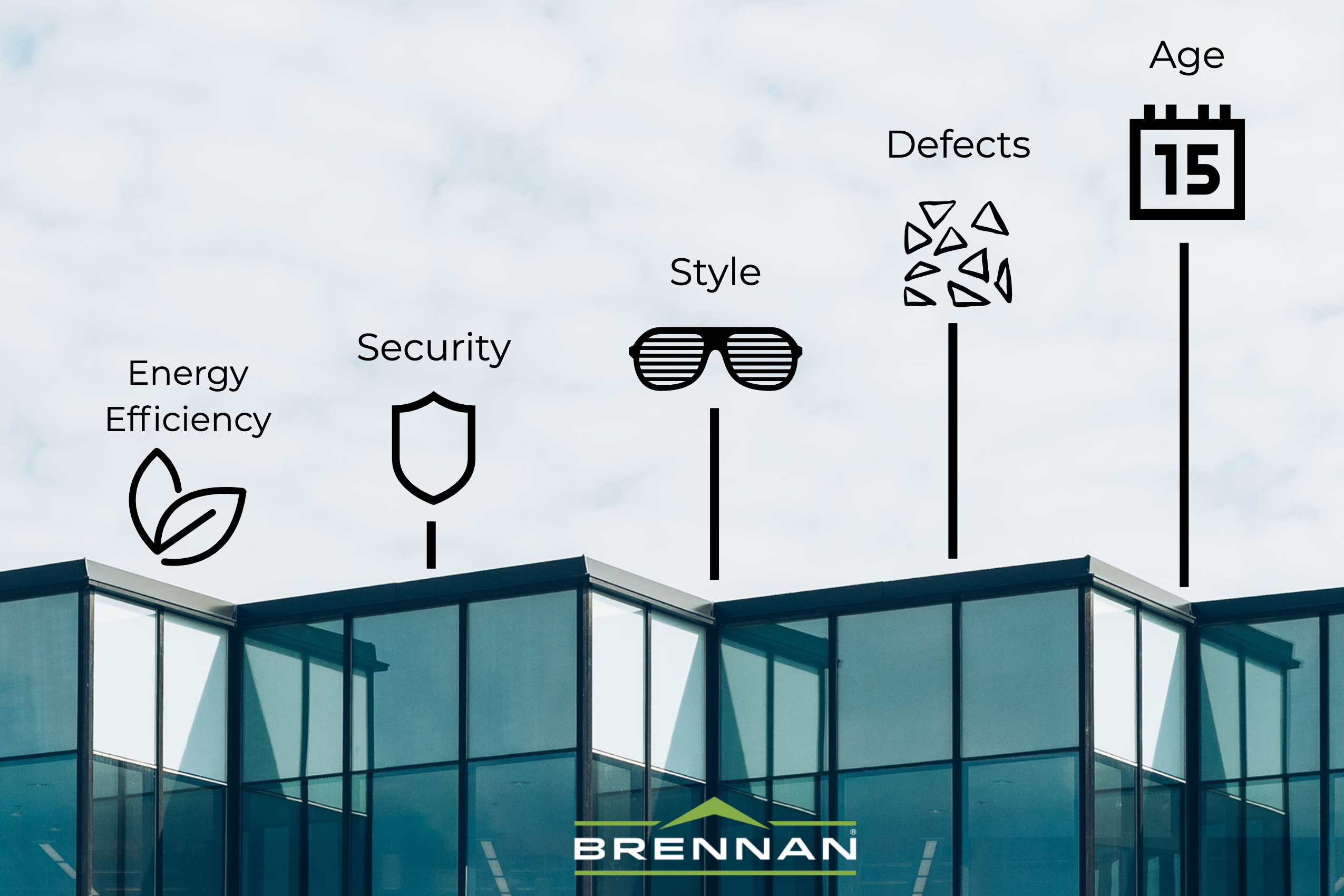 Window replacement is one common recommendation among construction professionals as a way to improve energy efficiency. Of course, as window experts ourselves, we agree with the recommendation. According to a study on the energy performance of residential windows, new windows reduce annual heating and cooling costs by 22%. Source: Arasteh, D., Carmody, J., Heschong, L., Selkowitz, S. (2007). Residential Windows: A Guide to New Technologies and Energy Performance (2007).

In an interview with NPR, Nadav Malin, president of BuildingGreen.com, said that "at [a] certain point, if you are going to make your house very energy efficient, you also have to deal with the windows."

Window replacement projects, however, can be expensive and reports from Remodeling.com and ISoldMyHouse.com estimate that replacement projects have between a 74%-85% ROI. So if your windows are otherwise functioning properly we recommend you also consider other ways to reduce your energy costs.

A few things you could look at doing to reduce energy costs include:

Windows are an entry and exit point to your home so windows that aren't opening or locking correctly pose a security risk. Some signs that burglars might look for to identify vulnerable windows include:

Windows need to open and close properly for the safety of your loved ones and guests especially in the case of an emergency where a window might be your only exit from the house.

In older homes, it is not uncommon to find windows that are difficult to open or close. One problem I've run into in older homes is that some windows can't remain open so the window has to be propped open. The risk in that, however, is the chance the window could fall and hurt a person or pet if they are in the way of the fall.

Sometimes it's just time for something new. In 2017 Empire Today conducted a national survey on the reasons why people took on various types of home improvement projects. Across the country, people reported the top reason for home renovation projects was because they wanted a new look and the least common reason was that they were planning on selling their home.

So what does that tell us? Well, it indicates that it's a good time to invest in your home especially if you plan on staying in it for years to come. You should feel comfortable in the home you live in and that includes enjoying the way it looks and feels.

If you want to update the style of your house getting replacement windows could be a good option. Designers at JELD-WEN and Andersen report that Black windows, clean lines, expansive glass, and sliding glass doors and folding doors are popular among homeowners. You can follow these trends by swapping out your grid-lined windows with windows with fewer grids, like those with only top row grids, or going completely gridless. Some popular window styles that fit growing trends are casement, awning, and picture windows.

You might want new windows if you're trying to restore your home to its original look. Some designers might recommend finding, restoring, and using original pieces like windows but new replacement windows will allow you to replicate the look and also provide better energy efficiency.

For tips on finding windows that match your home's architecture check out this article: Window Styles | Find the right window for your home

Window defects are the most important indicators that it is time to replace your windows. According to Empire Today's survey results, 19% of people in the South took on home improvement projects because something was at the end of its useful life and 25% wanted to replace/repair something that was damaged. Over 20% of those surveyed from the South identified windows as one of the home improvement projects they were taking on. If you need help spotting defects in your windows here are 4 defects that indicate you're windows are at the end of their lifespan.

Drafty Windows
Feeling a little air around your windows isn't uncommon but it shouldn't be noticeable and it definitely shouldn't noticeably rattle the windows. If you feel a slight draft around your windows you can try to seal the air leaks with caulk and weatherstripping but this isn't a permanent solution.

Water Intrusion
There could be many reasons for why there is water pooling around your window issues in the wall, roof, or upper floors. You'll know there is an issue with the window itself there is a visible leak where the window sash meets the jamb or on the window frame. There could be many fixes to this but remember that too much water can lead to wood rot. Solutions can be as small as replacing the weatherstripping to as complicated as replacing part of the wall before you can even replace the window. It's important to spot this and identify the source of the leak before it gets out of hand.

Cracks or Rot
Cracks in your window frame can lead to several problems and the severity depends on the size of the crack and how long it exists before it is repaired. Some problems include air leaks, water leaks, and letting in small insects (or worse). Visible cracks also weaken the strength of your window in general, especially when moisture begins to seep into the frame. A little bit of wood rot can be repaired but the frame has become soft it's time to replace them.

Condensation
Fogged glass is usually condensation trapped between the glass. This is an issue you might run into with double or triple pane windows, sometimes it is referred to as "blown" windows. What happens is windows expand and contract depending on the weather and this can cause the seal between the glass panels to fail. Windows with condensation between the glass are no longer operating at their maximum thermal performance. To resolve this issue you could replace the glass but it won't necessarily be a permanent solution because the real issue is that the frame caused the glass to fail.

Many people replace their windows because of the age of the window, likely because window dealers have said that its time to replace them after 10 or 15 years, but this is one of those cases where age is just a number. While technology does continue to develop more energy efficient windows and doors this alone isn't the only reason you should replace a window especially if it's functioning correctly.

So how do you make your window last past it's supposed 10-15 year lifespan? Proper maintenance is the key.

No matter how much windows are touted as low-maintenance or maintenance-free your windows will always require at least minimal maintenance. Upkeep for your windows really starts by keeping them clean to avoid build up and so you can spot any problems while they can still be repaired instead of having to take on a full replacement project.

Do you think you're ready for replacement windows? Check out our windows page to see what brands we carry.

Looking for more information? Check out the related posts below.

Chances are, someone you know has recently remodeled their home with energy efficient windows. Maybe you’ve even heard them talking about all the perks they now enjoy. Yet here you are looking for even more reasons to make the switch.

©2022 | Brennan Enterprises, Inc. All rights reserved. Product specifications are believed to be accurate at the time of original publication. Consumers should verify specifications prior to purchase rather than rely on information on this website, which is not intended to be a final specification. Projected lead times are based on current production volumes and order backlogs, however there are still some lingering supply chain challenges and disruptions that are difficult to predict or model.