Foggy windows are a common problem for residential & commercial windows alike yet there seems to be a lot of misinformation out there in regards to what causes it. Windows whose glass appears to be foggy can be broken down into two categories: condensation on the exterior surfaces of the glass and condensation on the interior surfaces of the glass. The former is a common occurence and there isn't a whole lot that can be done to remedy it; the latter is a more serious problem and indicative of the need for replacement.

Condensation on the exterior surfaces of the glass:

When we state "exterior surfaces" of the glass we are referring to the surface of the glass that you can physically touch on your double/triple pane window units. As stated previously, condensation/mositure on the exterior surfaces of the glass is a natural phenomenon that will occasionally occur on even the most energy efficient windows.

Fog on window panes is a form of condensation and so is the water that forms on the outside of a tall glass of iced tea in the heat of summer - it all comes from water vapor in the air. Window condensation is the result of excess humidity in your home and the glass only provides a visible cold surface on which humidity can condense.

The important thing is your foggy windows and sliding glass doors are trying to tell you to reduce indoor humidity before it causes hidden, costly problems elsewhere in your home such as peeling paint, rotting wood, buckling floors, insulation deterioration, mildew, and even moisture spots on ceilings and walls.

There are at least two steps you can take to reduce indoor humidity during the winter. For one, you can control the sources of humidity. Vent all gas burners, clothes dryers, etc. to the outdoors. Use kitchen and bathroom exhaust fans. Secondly, you can ventilate your home. Because outside air usually contains less water vapor, it will "dilute" humidity of inside air. This takes place automatically in older homes through constant infiltration of outside air. But again, in newer "tighter" homes, the only way outside air can get in is by ventilation.

During the summer, air conditioners or dehumidifiers are your surest ways of reducing humidity to desired levels. However, in most cases, outside air will be more humid in warmer weather, and condensation on the inside of windows usually isn’t a problem. During this time water vapor in the air will condense on the exterior surface of the glass on the outside of the home and there isn't really a whole lot that can be done about that.

Condensation on the interior surfaces of the glass:

When we state interior surfaces of the glass we are referring the the inner surfaces of the glass on your double/triple pane window units that you cannot physically touch. This is a more worrisome problem for your windows and is indicative of seal failure. In order to understand what I am talking about we will need to explain a few basics.

Modern double & triple paned window units have a window frame which holds the glass in place. These frames are typically aluminum, vinyl, fiberglass, wood, or a composite mixture. The glass units themselves are hermetically sealed and are referred to as an insualted glass unit, or "IGU" for short. A typical double-pane IGU is illustrated in the picture below.

When you notice condensations on your windows and you cannot touch it/wipe it off from either inside or outside your home then the IGU's on your windows have seals that are no longer doing their job or to put is more succinctly...mositure between the two pieces of glass is a symptom of seal failure. Basically, exterior moisture has entered the formerly air-tight IGU and can be visible as condensation or calcium/water deposits after the initial condensation has evaporated out of the IGU. 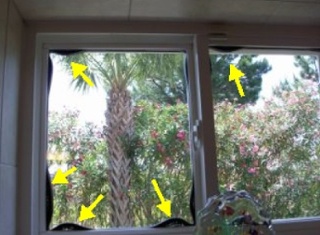 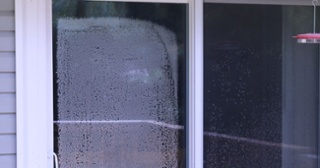 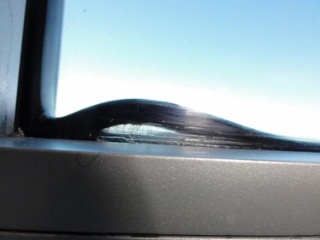 The pictures above are some obvious/clear examples of seal failure in modern double-pane window units.

What can I do if I have seal failure?

There are basically two solutions when it comes to seal failure on your windows. You can either replace the glass or replace the entire window unit. Glass replacement is generally the cheaper of the two options however it is typically a "band-aid" fix and is something you will likely deal with again in another 5-10 years. Replacing the glass is treating a symptom, not the root cause. 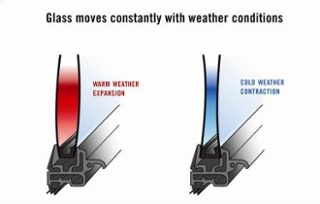 In the above picture a typical IGU is illustrated.  According to Gay-Lussac's Law, the temperature and pressure of a sealed container are directly proportional to one-another. In other words, if the temperature of a sealed container is increased its associated pressure increases as well. The same can be said if the temperature decreases. During the summer months the increased temperature on the IGU causes the glass to bow outwards as illustrated in the above image...during the winter months the glass bows inwards. (Please note that the illustrations are exagerated for dramatic effect). The constant hot/cold cycle on IGU's induces stresses on the spacer/seal which ultimately cause the seal to fail. Older windows with aluminum frames expedite this process as the old aluminum windows conduct heat & cold rather easily.

Older windows with older spacer/seal technologies are more prone to seal failure than newer windows. If you opt to get the glass replaced in your window then the IGU manufacturer will typically only warrant the replacement IGU for a period of 1 year due to the fact that the IGU is installed in an old frame vs. a new frame however this will vary by manufacturer and is something we would recommend looking into should you decide to replace only the glass in your windows.

Most modern window manufacturers offer a lifetime warranty against seal-failure on their windows. While replacing the entire window unit may cost more in the short-term, the windows will eventually pay for themselves in the long-term. Should you have any seal failure issues in the future the replacement glass should be covered under warranty (again this will vary by manufacturer and is something you should consider when purchasing new windows) however you will also gain the benefit of having new windows with more energy-efficient Low-E glass and less conductive frame materials.

How to Get Rid of Foggy Windows

©2022 Brennan Enterprises, Inc. All rights reserved. Product specifications are believed to be accurate at the time of original publication. Consumers should verify specifications prior to purchase rather than rely on information on this website, which is not intended to be a final specification.